Oldest Pig in the World

Oscar, the Oldest Pig in the World 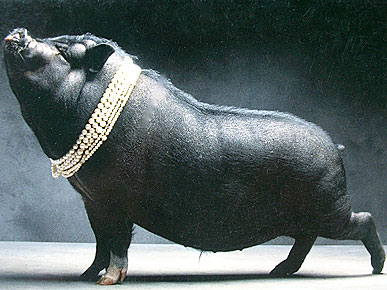 From People Magazine. Oscar, a pot belly pig, the oldest pig in the world

Dr. Landers was fortunate to be the veterinarian for Oscar.  Here is a link to his Guiness Book of World Records page.  This picture still hangs in Dr. Landers’s house to this day.

From the Dallas Morning News:

His long life – in pig years – has included a Colorado ski vacation, a TV appearance with a pet psychologist, and his photo on one of those wacky Avanti animal birthday cards.

The Vietnamese potbellied pig’s latest claim to fame is one for the ages: Guinness World Records recently named Oscar the world’s oldest pig.

“The average pig lives 15 to 20 years, so we call Oscar in bonus rounds,” said his owner, Stacy Kimbell of Far North Dallas, who believes having the 130-pound porker in her house feeds her rebellious side.

On Saturday, Kimbell hosted a pig-out for 40 friends, and they wore pig snouts and brought pig gifts. She also had lithographs printed to mark Oscar’s record-breaking feat. Oscar signed them with a blue snoutprint.

Miniature pets were all the rage in 1989, when Kimbell bought Oscar as a piglet. Dogs and cats were out of the question because of her ex-husband’s allergies, and the couple’s fish were, well, fish.

Oscar was a tiny fellow who liked to walk the streets of Chicago on a leash.

He topped out at an unhealthy 180 pounds before Kimbell got a better handle on his diet. These days his meals consist of roasted pumpkin mash, grapes, almonds, apples, watermelon and canned fruit. Dog treats are pretty tasty too, but his favorite snack is Southwest Airlines peanuts.

“He’s like a little disposal,” said Kimbell, 47, who admits he’s spoiled. Oscar won’t eat broccoli, cauliflower or onions. He licks the salad dressing of those veggies and spits them out.

And once he’s full?

In 1990, Oscar was a mere 60 pounds when a photographer spotted him on the street and invited him to be a greeting card model.

But make no mistake. This pig is all man.

He’s very protective of Kimbell and has chased away more than his share of males, from friends to the pizza delivery guy.

These days, Oscar leads a laid-back life. He has a house in Kimbell’s backyard complete with a miniature swimming pool and an umbrella to protect him from the sun.

At night, he comes inside and falls asleep in front of the television.

He gets a weekly bath with Suave shampoo and a rubdown with Skin So Soft lotion and udder cream. Occasionally Kimbell braids his tail.

Once a year, she helps Oscar into the front seat of her Mercedes for a trip to the vet to get his toenails and tusks trimmed.

Kimbell said Oscar is exceptionally smart. She’s learned to decipher his low-pitched grunts, from “I’m looking for you” to “I’m grumpy.”

They’ve been through a lot over the years.

Record on a whim

The attempt for the Guinness record came on a whim. Kimbell’s boyfriend – himself the owner of an 11-year-old potbellied pig named Ziffle – looked up the current record and discovered Oscar was older.

The application process involved a lot of paperwork to prove his age. Kimbell sent in Oscar’s birth records, photos of him growing up with her, and letters from veterinarians and his travels.

She got word of their success in late December.

Kimbell doesn’t have any big plans for her record-holder. She turned down an invitation to Rome for a Guinness TV show because Oscar’s too old to travel. He turned 20 on Oct. 29.

The four Berrier boys, who live behind Kimbell, pig-sit when she’s out of town. They’ve got bragging points with their friends now that Oscar’s the world’s oldest pig.

“It’s pretty cool,” 12-year-old Jake said. “Out of all the pigs in the world, I just happen to live across the street from him.”